All creatures are interdependent “I’ve come on a special mission on behalf of my constituency, which are the 10-to-the-18th-power — a million trillion — insects and other small creatures, to make a plea for them .” E.O. Wilson 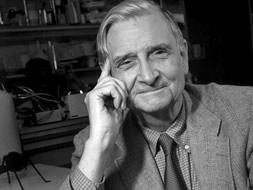 In yet another brilliant Ted talk biologist E.O. Wilson explores the world of ants and other tiny creatures, and speaks movingly about the way all creatures great and small are interdependent.

Why you should listen to him:
One of the world’s most distinguished scientists, E.O. Wilson is a professor and honorary curator in entomology at Harvard. In 1975, he published Sociobiology: The New Synthesis, a work that described social behavior, from ants to humans.

Drawing from his deep knowledge of the Earth’s “little creatures” and his sense that their contribution to the planet’s ecology is underappreciated, he produced what may be his most important book, The Diversity of Life. In it he describes how an intricately interconnected natural system is threatened by man’s encroachment, in a crisis he calls the “sixth extinction” (the fifth one wiped out the dinosaurs).

With his most recent book, The Creation, he wants to put the differences of science- and faith- based explanations aside “to protect Earth’s vanishing natural habitats and species …; in other words, the Creation, however we believe it came into existence.” A recent documentary called Behold the Earth illustrates this human relationship to nature, or rather separation from an originally intended human bond with nature, through music, imagery, and thoughtful words from both Christians and scientists, including Wilson.

“Each of these [bacterial] species are masterpieces of evolution. Each has persisted for
thousands to millions of years. Each is exquisitely adapted to the environment in which it lives, interlocked with other species to form ecosystems upon which our own lives depend in ways we have not begun even to imagine.”

“I reached a frontier of biology so strange, so rich, that it seemed as though it exists on another planet.”

“I turned to the teeming small creatures that can be held between the thumb and forefinger: the little things that compose the foundation of our ecosystems, the little things, as I like to say, who run the world.”

“If we were to wipe out insects alone on this planet, the rest of life and humanity with it would mostly disappear from the land. Within a few months.”

“The variety of genes on the planet in viruses exceeds, or is likely to exceed, that in all of the rest of life combined.”

Ref: Inspired a Ted talk which can be viewed in full at: farmingsecretsblog.com