Morphology
Termites are medium to small sized fully social insects (2 mm to 20 mm long). They are soft bodied and of colours ranging from very pale white to deep brown or black. They live inside colonies with two reproductive individuals (i.e. the king and the queen) and a very large number of sterile castes (i.e. workers and soldiers). The soldiers and workers look very different from the reproductive castes. The workers do most of the various tasks required by the colony (e.g. rearing young, foraging for food, nest building), while the soldiers defend the colony and have no other roles. 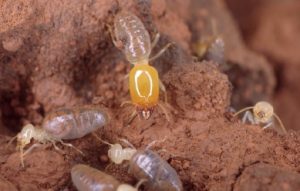 Termites are hexapods that form the order Isoptera, including 12 families. Termites are a special kind of social cockroach and, despite some similarities in shape and size, they are not closely related to ants. However, similar to ants, they are fully eusocial insects.

Microhabitat
They feed on dead plant material at different stages of decay; for example, dead wood, dry grass, leaf litter and soil. Some form a mutualistic relationship with a fungus called Termitomyces that breaks down dead plant material for the termites, who then eat parts of the fungus. Because of these food preferences, a few are serious timber and crop pests. However, most termites have a generally positive effect on ecosystems, living and feeding in the soil where they transform its structure, decompose plant residues, and help stabilise soils. They perform many of the same functions as earthworms, but the two groups are generally not found in large numbers together. They are often known as ecosystem engineers as they profoundly affect the structure of habitats for other organisms, both inside and outside their nests.

Diversity, abundance and biomass
There are about 2 700 described species. They are found in very large numbers throughout the warmer parts of the world, particularly in tropical rain forests, tropical savannahs and hot arid areas; they are not found, however, in many temperate regions and never in polar ones. They have their highest densities and diversities in tropical rain forests in Africa where they can reach up to 10 000 individuals per square metre (m2) and biomasses of up to 100 grammes per m2.