The soil surface and leaf litter are important components of soil made up of dead plant material, such as leaves, bark, needles and twigs, that has fallen to the ground, is very rich in nutrients and keeps the soil moist. It also offers the perfect conditions in which to build nests: hiding places and protected spots. Many of the organisms inhabiting the ground and the litter fall within the group of soil macrofauna (animals that are at least one centimetre long). Macrofauna include myriapods, beetles, insect larvae, slugs, snails, spiders and scorpions. Some of these organisms spend their entire lives on the soil surface and in leaf litter, while others are found only there at certain points in their lives. These organisms may have a high ecological importance (e.g. as decomposers of litter). 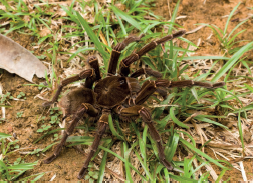 The class Arachnida are arthropods. They have 8 legs, the most well-known being spiders and scorpions. Spiders range from less than 1 mm up to 30 cm, such as the Goliath birdeater, a spider belonging to the tarantula family. Scorpions range from 9 mm up to specimens such as the Mexican cave-dwelling Typhlochactas mitchelli that can reach up to 20 cm. Spiders’ bodies consist of two sections: the cephalothorax or prosoma at the front, and the abdomen at the back. Spiders have a pair of cephalic appendages in front of the mouth, which they use to inject venom into prey from venom glands. There are more than 40 000 species of spiders.

Scorpions’ bodies are also divided into two regions: the head, the abdomen which is subdivided into mesosoma (seven segments) and the metasoma or tail (five segments plus a sixth, the telson, bearing the sting). The sting consists of the vesicle, which holds a pair of venom glands, and the aculeus, the venom-injecting barb. About 1 700 species of scorpion have been recorded to date. Spiders and scorpions are found on all major land masses, except Antarctica. Both groups are predators. They mostly prey on insects, although a few large species can also take lizards, birds and small mammals. Soil is often used as their hunting ground, in which they use different methods of capturing prey. One of the most clever strategies is adopted by the ambush ‘trapdoor spiders’ which burrow holes into the soil, often closed by trapdoors and surrounded by networks of silk threads that alert these spiders to the presence of prey. Scorpions hunt at night surviving periods of food deprivation up to 6-12 months.

Snails and slugs are the two most relevant groups of gastropods related to soil of the order Pulmonata. The clear difference between them is the presence of a conspicuous shell in snails which is made of calcium carbonate and has the typical spiral shape. Both snails and slugs range greatly in size; the largest species can reach 30 cm. Around 25 000 snail species are present worldwide, whereas only approximately 5 000 slug species exist. Terrestrial snails are usually herbivorous; however, some species are carnivores. Most slugs feed on a broad spectrum of organic materials, including leaves from living plants, lichens, fungi and even carrion. Some slugs are predators and eat other slugs and snails or earthworms.