Although the soil animals considered as megafauna are not actually large on a human scale, and rarely exceed 1 kg in weight, they are exceptionally ‘huge’ compared to other soil organisms. These animals often have a morphology adapted to digging and life underground e.g. long claws, short tail and/or hair for mammals and a flat, slender, or limbless body to creep in soil/litter for amphibians and reptiles. They sometimes have very tiny eyes or have none developing special organs, such as sensory hair/tentacles, bioelectric receptors, sensitive noses and even echo-location systems like bats, in order to detect their prey in darkness. 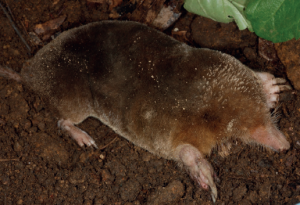 Almost all mega soil animals are vertebrates including mammals such as moles, shrews and some rodents which are regarded as soil megafauna as are adult salamanders and blind snakes and limbless lizards. These vertebrates utilize litter and soil as both habitat and feeding site. Some mammals, such as hares, rabbits, hedgehogs and foxes may build their dens in soil, but are not part of the soil megafauna because they do not use underground space as both habitat and feeding site.

Moles continuously build on underground tunnel systems as they burrow in search of food. Moles dig two basic types of tunnel: shallow, surface runways, and deep, more permanent tunnels. In addition, moles construct nest and rest chambers. Surface runways may be used only once; others are used frequently as main travel lanes and may be used for many years. Tunnels occur generally from 15 to 60 centimetres underground – deep enough to be below the winter frost line and to remain cool during summer heat. They are used regularly during the mole’s travels between its nest and rest chambers and surface runways. A molehill is built of dirt excavated from these deep tunnels, deposited on the surface in a volcano-shaped mound through a lateral tunnel. Nest and rest chambers are enlargements of a deep tunnel. Nests are made of coarse grass and/or leaves and are often located in protected areas underneath boulders or trees. Soil is also the perfect source of food for megafauna. Both moles and shrews have great appetites for earthworms, termites, ants, insect larvae, centipedes and isopods. In addition, they often eat caterpillars and terrestrial snails. An exception is the naked mole-rat that mainly feeds on the tubers of plants. Conversely, the carcasses and faeces of soil vertebrates are a high-quality source of nutrients and energy for invertebrates and microorganisms in the soil.

There are over 385 shrew species divided into 26 genera. Each species has its own area of distribution. For example, the nine mole species of the genus Talpa live in Europe and western Asia. Naked mole-rats live in colonies like ants and termites, with members responsible for different roles. Only one female (the queen) and one to three males reproduce, while the other members of the colony function as sterile workers. Smaller workers focus on collecting food and maintaining tunnels, while the larger workers are more reactive in case of attacks. Colonies range in size from 20 to 300 individuals, with an average of 75 to 80 individuals. They live together in complex systems of burrows in arid African deserts. The tunnel systems built by naked mole-rats can stretch up to three to five kilometres in length.

Whilst megafauna play an important role in the soil food, they can devastate cultivated crops