It is such a big subject. It is so involved that we can only bring certain money making aspects to you in this space

But the practices in modern industrial farming do not deliver nutrient dense produce. If it did then crops would not need to be saved with insecticides and fungicides. Animals would not need a patented chemical to help them along, to stay healthy.

Farming Secrets showcase farmers who have proven that they can farm more productively and more profitably without the need of the expensive commercial remedies such as used in modern industrial farming. They focus on their soils making them biologically active and mineral rich.

Today, just to illustrate the point we have included a study done by agronomist, Chris Allenson when he was Chairman of ORGAA*. He grew vegetables in a biologically active soil. It had been enriched with a commercial mineral fertiliser, composted mulch and activated with liquid fish fertiliser. The results tell the story.

The table below illustrates some mineral analyses of organic produce grown on mineral enriched and biologically revitalised soil and analyses of similar items purchased from the supermarket. 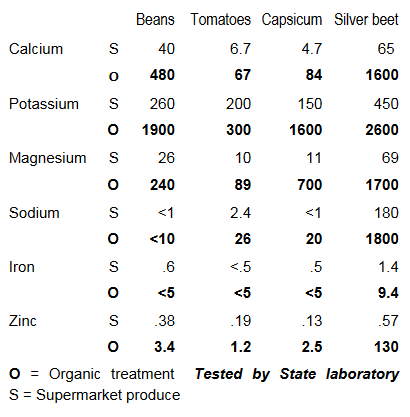 Just imagine how much better your plants, stock and ultimately we would be if we all consumed food that had been similarly grown and contained at least 10 times more nutritional elements in it? Plus the produce would contain no toxic residues which affect plant, stock and human health too as it does not need man-made patented chemical applications to keep it healthy. This would further enhance our well being and the environment.