The number of known plant species has been estimated to be around 400,000. The majority (i.e. 260,000 – 290,000 species) belong to seed plants with around 1,000 Gymnosperms. Nearly all the others are classified as flowering plants (Angiosperms). It is difficult to estimate plant root biomass because:

Nevertheless, as a general rule, plants allocate relatively more biomass to roots if the limiting factor for growth is belowground (e.g. water), while they allocate relatively more biomass to shoots if the limiting factor is aboveground (e.g. light). For this reason, a low root biomass is usually typical of plants living in forests and woodlands, while a higher root biomass can be found in desert plants.

Observing a cross section of a plant root, the main visible structures are:

Note: The effect of synthetic chemicals on root growth 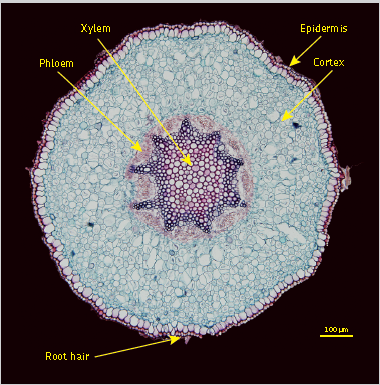 Synthetic fertilisers have been recorded to severely disrupt the function of the phloem and the xylem within the plant root. It is noted that instead of regularity of the cell formation, there are irregularities of cell formation* of these 2 vital structures. (Seen in pink and purple in center of root cross section)