“Now the sun, moving as it does, sets up processes of change and becoming and decay, and by its agency the finest and sweetest water is every day carried up and is dissolved into vapour and rises to the upper region, where it is condensed again by the cold and so returns to the earth.”

The small water cycle is a closed circulation of wat 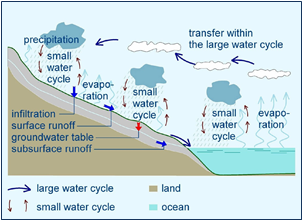 The circulation of water in the small water cycle is mostly vertical in movement. Evaporation from adjacent areas with different temperatures mutually result in the development of cloud cover. Above land water circulates at the same time in many small water cycles which are subsidized with water from the large water cycle.

The name of the small water cycle gives the impression that the cycle contains only a small amount of water. The opposite is true. The average annual precipitation over land is 720 mm and the input from the seas is about 310 mm. From this information it follows that land provides the larger part of its own precipitation (410 mm) from its own land-based evaporation. The precipitation in a region shares in the saturation of soil with rainwater, and through the small water cycle, roughly one-half to two-thirds of rainwater (50 to 65%) goes into the repeated creation of precipitation over land. This is very important information which should fundamentally change our current approach to the management of water in river basins.

Mankind cannot transform and drain the land limitlessly without also having an impact on its precipitation and its thermal regime. If we want to have stabile precipitation over the land, it is very important to ensure evaporation from the same land. Evaporation from land is the difference between precipitation and runoff. If we have a great outflow of water from a territory, this will be to the detriment of evaporation and will cause a subsequent decrease in precipitation. The volume of water in the small water cycle over land will gradually decrease. With a decrease in runoff, on the other hand, we get greater evaporation and thus we actually “sow the rain.” The small water cycle, also the short or closed water cycle, is characteristic for hydrated healthy country.

In a country saturated with water and water vapor, water circulates in small amounts and for relatively short distances. This occurs thanks to the differences in temperatures between day and night or between localities with different thermal regimes. The majority of water that evaporates condenses again in the given region or its surroundings. Frequent and regular local precipitation retrospectively maintains a higher level of groundwater.