The speakers at this conference make a living from their decisions relating to various native pasture management regimes in their various enterprises.
Highly Recommended 4.8
★★★★★ 5/5 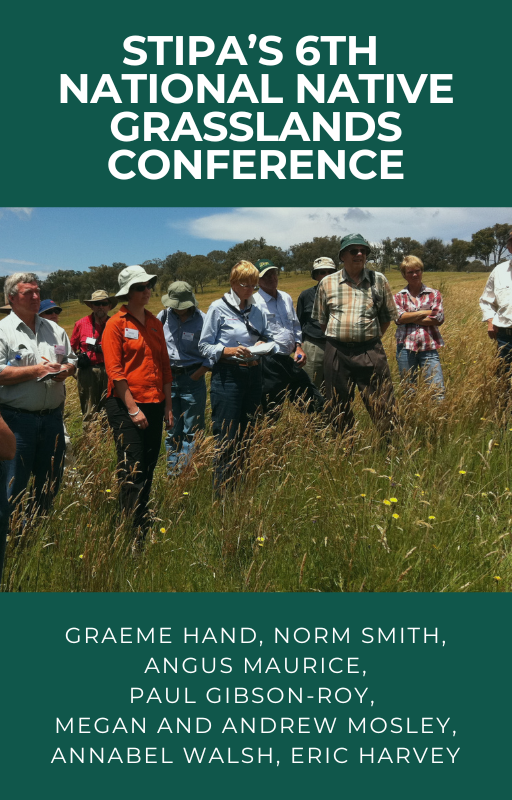 The speakers at this conference make a living from their decisions relating to various native pasture management regimes in their various enterprises.

Graeme’s property, small beef (200 ha) was purchased in 2001 and had previously been cropped or “pasture improved”. The majority of the property was capeweed, onion grass, bare ground, and thistles with some areas of ryegrass and phalaris. Using the Holistic Management® framework and Planned grazing™ the property now has significant areas of native grasses as well as introduced perennial grasses. A simple explanation of this management is provided.

Angus’s family has been comparing conventional, no till and pasture cropping for several seasons. This presentation details what he has found in terms of the business and landscape benefits of pasture cropping. Some of the benefits have been more stable results as well as an increase in soil health as well as increases in native grass establishment and diversity.

Temperate south-eastern lowland native grasslands are among Australia’s most threatened plant communities and have recently been listed as a nationally threatened ecological community under the federal governments Environmental Protection and Biodiversity Act 1999. Commonly restoring these grassland communities is by the reintroduction of plants grown as container-stock.  Another approach to grassland restoration is by direct seeding.  Paul presents his work in this area.

In the last 5 years, the Mosely’s have made significant positive environmental improvements on the 26,000 ha of land they care for. Successfully reversing the degradation caused by continuous grazing and  finding effective ways to regenerate the natural landscape, the Mosely’s are working on restoring and rejuvenating the water, mineral, and carbon cycles by increasing ground cover with predominately deep rooted native perennial grasses.

The functional integrity of our soils have been long overlooked and misunderstood by all disciplines in the land management business. Cropping system managers have put their energy into improved varieties, wiz-bang fertilisers and master chemicals for weed control, while grazing system managers have concentrated on better genetics in their livestock, improved pasture and fertilisers. These practices have resulted in loss of natural capital. In this presentation Annabel who manages 60,000 ac hopes to demonstrate the understanding of the complex interrelationships between ecosystem dynamics and the impact of our productive system can work in harmony.

In 2000 Eric purchased land which he managed in a completely conventional agricultural model.  Then in 2003 Eric fell out of the shearing shed and broke his back and leg in three places, but he didn’t stop and think! Then in 2004, he had a massive heart attack forcing him to stop and think, and as result, management changed!  Eric now practices biological farming from a holistic management aspect and this process of change will continue to evolve. He keeps extensive records of all his farming operations and is very excited about the outcomes! Eric has moved the property from negative to positive profits.

DON’T SAVE $30!  SPEND IT NOW ON THIS EXCELLENT SERIES. YOU’LL BE DELIGHTED!

FARMING SECRETS recommends this series to all farmers looking to “get their head” around restoring native grasses and to incorporate them in their farming operations. As Graeme says, it is in the management of the systems where the results occur. Each experience related here is inspirational and encouraging and good value for the wealth of experience shared. Over 4 hours! (Our arm was twisted to keep the price down low.)

FIND OUT HOW TO SURVIVE AND MAKE PROFITS WITH NATIVE GRASSES – even in drought years!

Norm Smith presents an overview of his farm operation which has been in the family now for 4 generations.