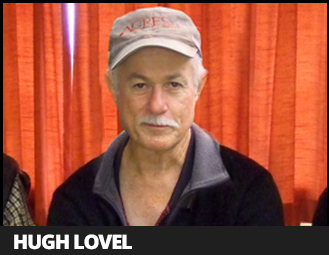 For years I have heard the name Hugh Lovel. I knew that he was highly regarded in the world of sustainable farming, he was American and that he had written a book called“A Biodynamic Farm” However it was only when Elaine Ingham came to town that I became aware that Hugh was now residing in Queensland, Australia and through her became curious to know more about him.

Hugo was too as he’d read Hugh’s book and was eager to know more about Hugh’s work with energy towers. However we were not to meet until Hugh was a guest speaker at a VODFA meeting in Darnum last November; in fact we filmed him, resulting in the DVD “The Cutting Edge of Biodynamics – An Introduction”.That particular day I observed that come time to go, Hugh stayed and talked to the many farmers who remained to hear more. In fact, it was only when the Darnum Hall had to be locked that Hugh reluctantly left! It didn’t seem to matter what the question was Hugh had the answer, drawing on his vast storehouse of knowledge gained from years and years of experience, keen observation, study and a voracious appetite to learn.

I listened as one adviser kept asking about various problems with growing potatoes, it didn’t matter what the problem was Hugh could immediately tell the cause of the problem each time due to his understanding of the biochemical sequence of which he’d lectured that day. I was blown away with his knowledge and practical advice; it was so refreshing to hear someone actually know what they were talking about! I thought then of what a gift Hugh is to farmers keen to understand more about their plants and why they develop problems despite it seems everything is in place for perfect growth. Hugh developed the Biochemical Sequence when he found that soil testing that did not automatically include tests for silicon.

It led him to discover the importance of different elements at different stages of plant development arriving to the realisation there was an obvious hierarchy of how elements work in living organisms; one thing has to occur before the next thing can happen, and on down the line in a sequence. The biochemical sequence is an explanation of the interplay and cycles of biochemicals in living organisms. He shows the fascinating roles of boron, silicon and calcium in sap pressure, nutrient delivery, successful fruiting and amino acid production. The interplays of nitrogen, magnesium, trace elements, phosphorus, sulphur and magnesium are revealed and the farmer is given a new and practical insight into the role of nutrients.

We realized then that Hugh is a natural teacher and loves sharing with all with whom he comes into contact. And people love him as through stories he brings simple explanations to often complex subjects. He provides the human story and the missing pieces which when expressed seem so obvious. For the uninitiated Hugh is a great speaker bringing to life history, maths and science so that one renews a fascination in each subject as it appears. He truly reveals the central core of how biodynamics works and one is left wondering about the wonderful and complex yet ordered world that nature provides. And so it is that we present to you Hugh Lovel’s latest Digital Products in the series: The Cutting Edge of Biodynamics – Unfolding the Science for Growers.

Hugh speaks on a range of topics – all of direct relevance to any grower serious about understanding the complexity of nature and of the biodynamic system. Farming Secrets thoroughly recommends this set of Digital Products to you.

About Hugh: His AgPhysics advisory service covers all aspects of agriculture including livestock and environmental repair, with special emphasis on the underlying patterns of energy that determine such things as weather, crop vigour, flavour and keeping quality.